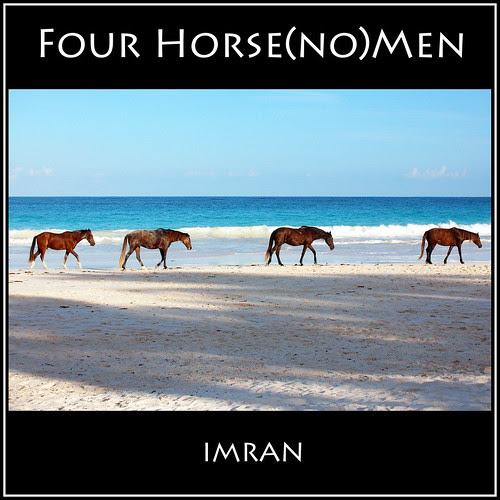 The Four Horsemen of the Apocalypse are characters in Biblical stories, towards the end of the New Testament compilation period. Wikipedia explains how it is an anthology of stories written at different times by different authors around 2 centuries after Christ's time. The Four Horsemen represent things like pestilence and death, so it is ironic one of most stunning photos of the world's most beautiful seascape I took was just a few miles from the above spot.

While those stories' four horsemen are not characters I'm looking forward to meeting, these four horses with no men were photographed with a pocket Nikon S1 during a beautiful trip to Harbour Island, before Christmas 2007. This was taken lounging on the beach outside the really world class hotel there, Coral Sands, at Dunmore Town, on the island of Eleuthera. This truly is one of the loveliest beaches in the world, in the heavenly islands of the Bahamas, right here on earth, in the Caribbean.

One of the horses had literally rolled himself in the soft pink talcum powder soft sands (not exaggerating, that is how soft the sand is) with the backdrop of the powder blue sky, shiny wet turquoise waters gently rolling in from the East - while the setting sun to the West, over my shoulder, cast a reddish glow on them, and drew pictures on the sand almost looking like the Batman symbol.

Structurally it was interesting how the photo got split into accurate thirds, halves, and even how accurately (though quite by chance) the horses are framed exactly within the space of the wet/dry sand line and the edge line of the white surf with turquoise sea.

Definitely a place to lounge away romantic days and gentle loving moonlit nights, and one I hope to return to one day, for more horseplay and other plays :-)