I have been an Apple user for 30+ years, and a Mac bigot since 1984. Even though my day job is at Microsoft and I use Windows laptops, Surface, Windows Phone Lumia, my personal life's work is invested (and sort of locked) in the Apple ecosystem.

Even my MS colleagues know, I would often be the only guy at an airport with a PowerBook laptop in a sea of Windows machines, which I was no fan of. But the decline in innovation and quality at Apple has been shocking. I’ve had MacBook laptops that had manufacturing defects that Apple hid and then stopped patching after warranty. I had to replace my iPhone 4S (a great device) three times because of static noise issues.

I cannot even buy an external fingerprint reader for Mac OS that would work while I have it built in my PC laptops. I have no touch on the latest Apple MacOS devices. The gorgeous near perfect keyboards of previous MacBook Pros now have been replaced by plastic types that even PC users match or exceed.

iOS and its boring icons are still brain dead and have not evolved since iPhone started. I barely have to life my WindowsPhone screen and still can see who emailed me, what the weather changed to, what the latest news are, what someone said on FaceBook, see my photos rotate, ALL on the home screen without touching the phone. Yes, the Apple ecosystem still has a million more apps but after my initial craze which led me to have 1100+ apps on iOS, I have been aggressively deleting apps since only a handful are actually used. Of those about 80% are available to me on WindowsPhone too.

My latest iPhone 6 Plus has a lousy 8MP camera while my year+ old Windows Phone Lumia 1020 has 43MP that runs rings around it. But worse of all is the sheer number of painful experiences I have had and seen people report on Apple's own boards is mind boggling.

I used to complain about Windows control-alt-delete but with Windows 8 and now Windows 10 coming plus Windows Phone and super cool Live Tiles the user experience is far more innovative than Apple’s. Samsung users tell me even on hardware that company is beating Apple in new features. But the latest shocking defect in Apple hit me today.

You know how Bluetooth connects different vendors products for 15 years but can you believe Apple's latest MacBook Pro & iPhone 6+ fail to connect to each other even with latest Yosemite and iOS 8.1.1 !

In the old days all media did was predict Apple's death and I would argue against it. Now I see Apple non-stop defect laden launches but hardly any media express outrage or show coverage over it. I am not hating on Apple because someone at MS wants me to. After all, as I said, I have been invested in the Apple ecosystem and even my most used Mac apps are from Microsoft, including Outlook, Office/Word/PowerPoint/Excel and especially OneNote.

It is a pretty incredible switch of roles that I did not have any mail loss, data loss, issues moving from Windows 7 to Windows 8 and even Windows 10 Preview but I lost days of effort to resolving about a dozen separate known bugs and defects in upgrading the MacBook Pro to Yosemite and the iOS devices to iOS 8. That is definitely not how the yesterday’s gold standard of user experience and quality, Apple, worked. Is anyone a clear winner in that user experience war. Not right away. But at least today Apple’s clear lead in that area is gone.

That is why the next personal devices I am lusting for are not Apple gadgets but the Microsoft Surface Pro 3, an Xbox One and a Microsoft Band. Hint, hint, if you really love me, and of course you do :-) , Christmas is around the corner. Just kidding! 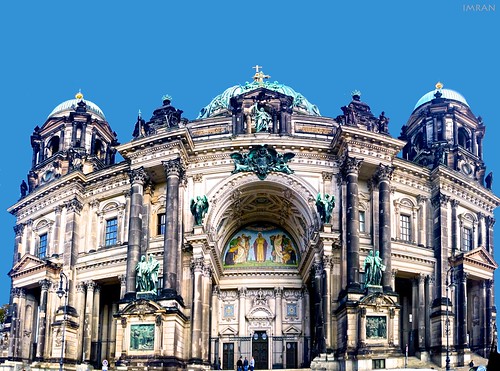 I love Berlin, Germany, and every time I am in Berlin since my first visit 27 years ago, I always enjoy visiting the Lustgarten area and seeing this imposing structure of the Berliner Dom.

I was able to take this awesome composite photo by combining a few photos taken with my Windows Phone Lumia 1020 and photmerging them in Photoshop. It is amazing how much detail can be see if you view the 55 MB 11000x7800 pixel image on a giant screen.

(Flying In) A New York, New York, State Of Mind. --- Stunning Manhattan Views In Fall. Come fly in to New York City and enjoy the spectacular sights of the Verrazano–Narrows Bridge, Statute Of Liberty, New York, cruise ships, downtown ‪#‎Manhattan‬, Freedom Tower NYC, ‪#‎Brooklyn‬, the major bridges, ‪#‎Queens‬, Citifield - Mets Stadium, as well as the 1964 New York World's Fairand other landmarks you have seen in movies and on TV, on an early Fall day with the beautiful foliage showing different colors before winter sets in. Recorded with my handheld Microsoft Windows Phone Nokia Lumia 1020 with NO color editing of any kind. Click the gear button on YouTube to see it in HD or 3D.
http://youtu.be/z32yHB1LVjI
Posted by IMRAN™ at 11:42 AM No comments: