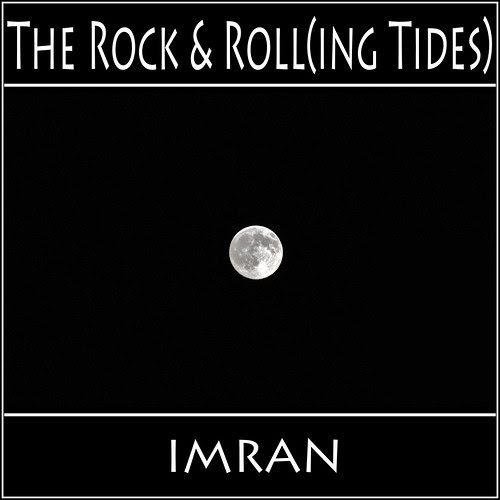 The Rock & Rolling Tides Of Time
by Imran Anwar

There It Is! The Rock!
Shiny Old New Full Moon,
Rising Up, Again So Soon.
But Never Dull, Not Routine,
This Bright Uplifting Scene.
As Long Day's Wait Finally Ends
Towards A Heavy Night It Tends.
Gravity Pulls, What Matters?
Silently Lifts Bay's Dark Waters
Mass Of Land Had Held At Bay.

Posted by IMRAN at 1:40 PM No comments: Links to this post

No Terrorism Monster Godzilla In House Of God, God's Villa 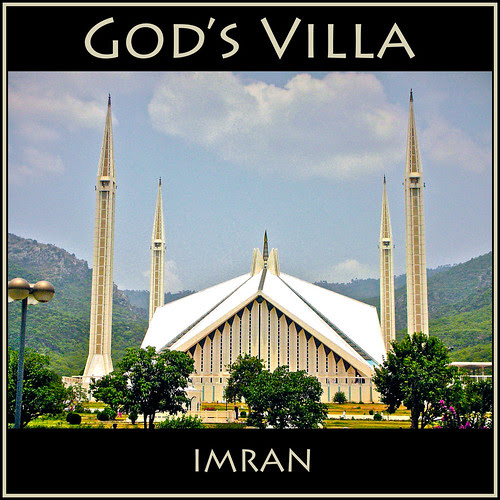 The Faisal Mosque (in memory of the only pious King of modern Saudi Arabia, the assassinated Shah Faisal) on the outskirts of Islamabad, Pakistan, is among the largest houses of God in the world.

Just like the symmetry of the photograph above, the ironic similarity, rhyming and conceptual congruence between God's Villa and the monster Godzilla is intended to raise awareness, not to offend. It is up to us to have religious faiths in our lives to be better people, but also to stay involved in who and how someone speaks for our religions.

This is true regardless of what religion we practice, Islam, Christianity, Judaism, or other, non-monotheistic, religions, like Hinduism, etc. Without educated, sensible and intelligent people staying involved, religions can be hijacked, and God's Villa overtaken by the monster Godzilla of fanaticism, intolerance and terror.

So help me, God, to save the houses of God, from the actions of the Satanic, verses of hate-preaching and the No-SoulMan's Rush2Die and kill innocent children and people going to school or to prayer.

Posted by IMRAN at 3:28 PM No comments: Links to this post

April 23, 2010 — Imran Anwar, ranked "Most Influential" in Cloud Computing on Twitter, clears the air on Cloud Computing. 10 minutes could save you 10 million or 10 months of trouble or more. You must view this, especially if you are an end-user or business/technology manager thinking about investing in Cloud Computing, or are a vendor/service provider offering or planning to offer services in this fast growing area, or if you are a member of the media or analyst community. The key points raised in this engaging brief video will save you a lot of heart ache and grief. Don't spend another minute or another Dollar on Cloud Computing without speaking to Imran Anwar.
Posted by IMRAN at 1:21 AM No comments: Links to this post 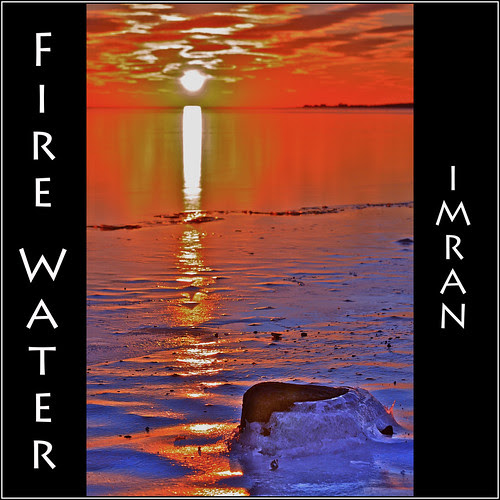 Before you accuse me of doing HDR work or clicking some random effects in PhotoShop, hear me out! LOL

It was a frigid day when I walked out to the beach to capture the sunset. My fingers were near frozen and (still being too lazy to read what all the buttons on my Nikon D300 do) I simply was squeezing and twisting buttons on it. ( Others from that day will be posted later).

As they say, "Given enough monkeys with enough typewriters at least one can produce the complete works of William Shakespeare..."

Fortunately, Shakespeare did not take pictures.

This photo may not win any awards but the over-saturated looking, somewhat overexposed yet nearly unreal reflections of the burning sky set the perfectly still water on fire.

The melting comet-like iced-rock on my beach and the unreal reflections around it simply added to the drama of the moment with melting Gold dust seeming to reflect on the ice. That of course made me insert my first French-word play pun in the title. :-)

Posted by IMRAN at 9:00 PM No comments: Links to this post

Whites Of Their Skies 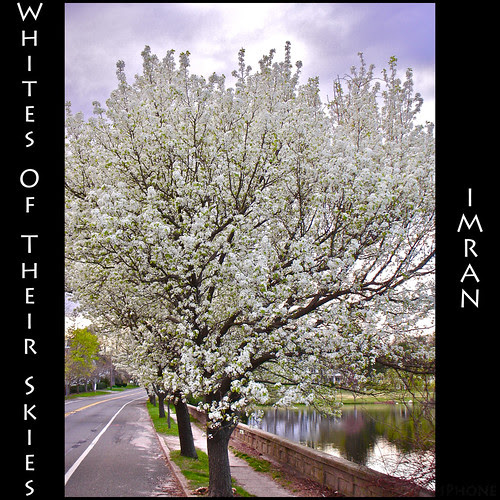 Whites Of Their Skies - IMRAN™, originally uploaded by ImranAnwar.

I would love to only post "obviously" dramatic and stunning images taken in exotic locations or with my Nikon D300. But, I don't want to miss out sharing the unexpected "ordinary" sights of beauty I walk by every day even with just an old pocket camera in hand.

April 13, 2010 was a somewhat windy and cool day. I had to time the photos that day to avoid traffic that does get busier around 5 PM.

The falling sun's light made interesting patterns in the oncoming heavy clouds (will post that one another time). The newly blossoming trees' white shades created interesting effects against the gray sky, white clouds and green hedges while the old classy homes reflected on Robinson's Pond.

I found it interesting that even though I did not change the colors, the clouds in this size exported image look purple but just deep gray in the original sized image. Enhanced Contrast & lightened Shadows in iPhoto and framed in PhotoShop.

Reminds me of similar colors but opposite weather at this picture. 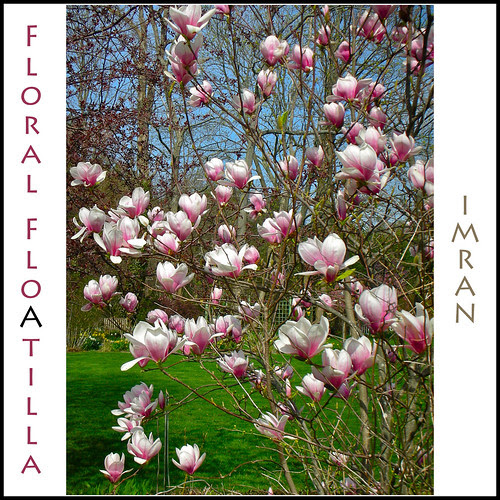 These pretty pink flowers seemed floating in the air on South Country Road, in East Patchogue, Long Island, New York, as I walked by.

I did not want anyone to think I Steal Magnolias ;-) . Taking care not to step onto the property they are on, I tried to capture the Floating Flowers Flotilla (hence the Floral Flo(a)tilla title).

I don't know the official name of this plant but those are the real pink colors of it, not Photoshop.

I am happy with my current "standard" Black frame with title and name presentation method in my stream, and my friends love it too. But, this image made it worth trying a white version. What do you think, compared to the version below?

Posted by IMRAN at 10:44 PM No comments: Links to this post 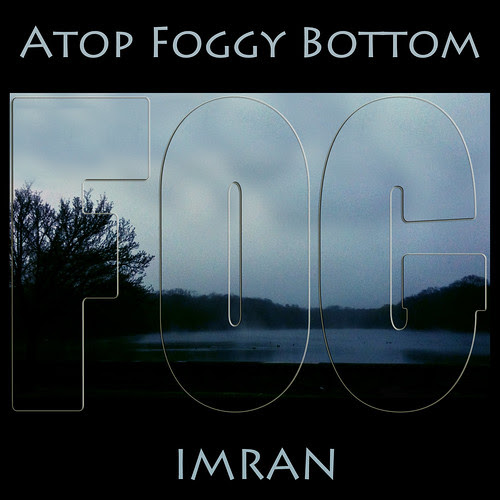 Atop Foggy Bottom
by Imran Anwar

Posted by IMRAN at 5:30 PM No comments: Links to this post

Dome Of The Rock - Heaven Is A Place On Earth 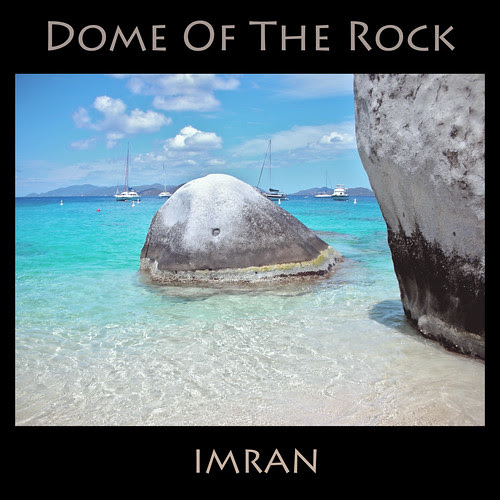 Dome Of The Rock. Heaven Is A Place On Earth. The Baths, Virgin Gorda, British Virgin Islands - IMRAN™, originally uploaded by ImranAnwar.

People fight and kill for sandy pieces of land, on the gates of perceived heavens, when God has created heavens on earth we cannot give enough thanks for.

This dome shaped rock is a highlight of the stunning swath of beach at The Baths, in Virgin Gorda, the British Virgin Islands. A place that makes you say "Oh, God!" more than most places of worship.

The truth is, without justice, there cannot be peace on earth and the sands of time will churn with rivers of blood, as man kills man, to try to prove who is a bigger prince of peace. And, God, isn't that a shame on earth.

PS If you have not seen it, I highly recommend you watch KINGDOM OF HEAVEN (available on DVD).

Image Notes: Taken on a Norwegian Cruise Lines cruise in 2008 with a pocket Nikon S6. Imported into iPhoto. No cropping. Did not reduce highlights which would make the rock top less shiny but it would dull the stunning water and sky colors. Reduced saturation a bit & added title frame in Photoshop.

Posted by IMRAN at 4:10 AM No comments: Links to this post