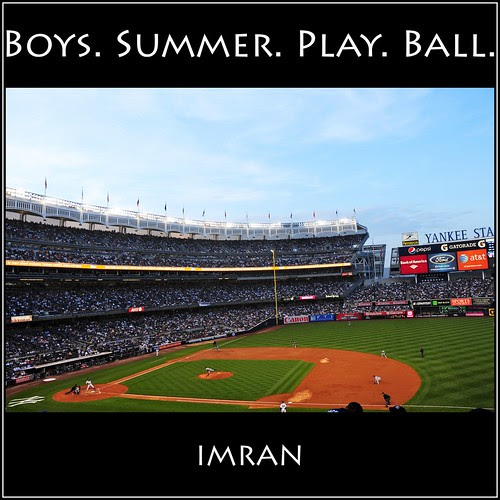 Baseball. The All-American pastime. A moment frozen in time, as two bitter rivals, like Gangs of New York, vie for victory over each other. This handheld shot caught the ball literally in the air hurling from the pitcher's hand to the strike zone.

An old flame of the time, a big Mets fan, took me to my first baseball game on my birthday in 1993. We had apartments in the beautiful Monterey, and from our apartments we could see Yankee and Mets stadia. Later that year, my old Columbia Business School roommate, Jim Malley, who had moved into another luxury building across the street from mine, took me to a Yankees game.

Generally, I am not a big Baseball fan - still loving Cricket over it. But, I root for NY teams, whoever they play against. Between the Yankees and the Mets, my tendency is to cheer for the Yankees. (Sorry, Beth! LOL)

Then on my birthday in 2002 my THEN lovely girlfriend (and one of the nicest people and prettiest girls I ever met, Catherine) took me to the Mets game, again.

After that I did not go to any more games. Until 2009, that is. At that time, my lovely girlfriend (Kathryn) took me to another Mets game, at the New Mets Stadium. It was fun. (Note to self... what is it with beautiful blonde girlfriends always being Mets fans! LOL).

In May this year, in an unexpected last minute plan with my childhood friends (whom I have a reunion with every year) had us in Manhattan for the weekend of my birthday. Spur of the moment, we decided to go see a Baseball game and got two for the price of one... a Yankees-Mets game at the New Yankee Stadium.

It was a great game. It started at about 6:30PM, with the sky still pale blue. And it ended under the bright lights of the arena. The Yankees won 7-3.

Among several shots, this one was a good representative photograph... of the Boys (of) Summer, (as they) Play Ball...

Now I need to see an extra 2 Yankees games to bring the total number of games of each team I have watched back in balance. :-)