Keep A Finger On The Pulse Of Fingerprint Readers In Gadgets

By now everyone has probably seen the news about Apple's recently launched iPhone 5S. Even as an old time iPhone fan, I had stopped buying new ones since the iPhone 4S. The iPhone 5 had not given me any compelling reason to buy one either. Ironically, in that period of time, even as an old time Mac user and past critic of old versions of Windows, I joined Microsoft.

I did not immediately get a Windows Phone (even though I was losing out an employee discount) and waited until the phone I really wanted came out….. The Nokia Lumia 1020 WindowsPhone 8, with its 41MP mind-blowing smartphone camera, which I bought without a discount or employee rebate. I still kept and use my iPhone 4S, because of the many apps I had bought over the years, and music that is tied to iTunes/Apple at present.

I was very hopeful for a truly innovative iPhone 5S, because, even though Apple's phone is now a direct competitor to my employer's recently acquired smartphone business, I believe innovation at one leading competitor benefits us all, as others have to work hard, invest in innovation and build great devices and services around them.

But, try as I might, despite being eligible for the new iPhone 5 upgrade from AT&T, I did not see any compelling reason to buy this one, at least yet, while my 4S is working fine. The only thing that I found of some interest was the fingerprint reader Apple built in, based on a company it had bought not too long ago.

I have always been a fan of natural interfaces or input devices.

Ironically, my first fingerprint reader was actually a Microsoft branded one I bought for one of my PCs in the days I was a big time Mac fan.

A few years ago I discovered Authentec's USB readers and bought several, especially as they could work on my Macs and my PCs.

Some time later their prices dropped drastically and I found Apple had bought the company. So, predicting that the next generation iPhone would have fingerprint capability was not a leap of genius.

However, I have to say my experience with the Authentec USB pluggable fob readers was frustrating, to the extent I do not use them anymore. Sometimes it would take half a dozen attempts of aligning the finger, the reader and Jupiter with Saturn before it would accept the print. I found simply typing in my complex password took less time and frustration.

Ironically, now that my current position is with Microsoft, I am happy that the technology is becoming more mainstream even if launched by a competitor. Such wide distribution of technology features leads to a greater pressure on everyone to improve the technology. (Remember how frustrating BlueTooth was early on?).

I have a fingerprint reader built into the new Lenovo Windows 8 (now. 8.1 :-) ) laptop I got earlier this year, and it works smoothly, quickly and without trouble (so far!).

So, I am hoping to see more of that technology in other laptops and smartphones. Let the new game begin…. Touch And Go (Innovate!). 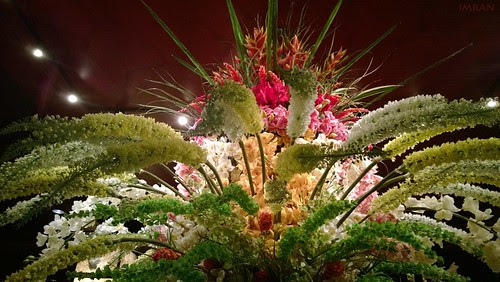 SOOC Image Straight Out Of WindowsPhone Lumia 1020 Smartphone Camera!! NO editing, tweaking, or color processing of ANY kind. Only added © IMRAN in top right corner..

It is hard to imagine that this is a smartphone camera photo taken at night in a dimly lit restaurant with the cell phone's built in flash. I took it at the Texas de Brazil restaurant's salad bar in Tampa, Florida.

I am glad I waited for the Nokia Lumia 1020 before buying my WindowsPhone.

Why I Would Never Recommend A Lenovo Thinkpad Laptop To Anyone

Even as a then Mac bigot the Lenovo (then IBM) ThinkPad with a writing pad and touchscreen was one of the few times I had bought a Windows laptop.

Fast forward to 2013 and I was given a brand new Lenovo W530 for work and hate it (though much less than the lousy new HP Ultrabook).

In 2013 a no touchscreen Microsoft Windows 8 laptop is funny enough, but it is designed by a team of truck designers or drivers. They put a 15 inch non-touch screen in a body bigger than most 17" laptops. And about as elegant.

WARNING: You need to buy a matching Samsonite luggage set for this, not to protect the laptop but to protect other people's luggage from it.

Get a set of two, one for the boulder-weight laptop and the other for the power adaptor just slightly lighter than a concrete block.

It has the weakest speakers on any laptop I have ever owned, and the world's most atrocious sandpaper textured trackpad that often requires multiple attempts to register movement.

And what can I say about the Lenovo web site designed by those who were rejected for mail room janitor jobs….

The site asks you for a 4-25 character ID, which it later rejects because you used non-AlphaNumeric characters, like a period in the name. They of course do not state it before you have clicked submit.

You write a short review and THEN the site does not accept it because it has "too much text"… but it does not tell you what the text limit it. This is the last time I will go to their web site….

Though Windows 8 has been rock solid on this and I have not had any crashes at all since I got it, the hardware is the worst ever from a company division that used to be IBM.

I cannot recommend this to anyone.... well, except my worst enemies. :-)

------------------
As if things could not get worse, or as if to prove some latent tendency to feel pain and anger, I went to the Lenovo web site to look for some updated firmware and drivers. The made-by-Martians-for-Saturnites-living-on-Neptune interface would be funny if it did not make you cry for how you have to (or I had to) click on about a dozen or more links to display the drivers under various areas, and then to click on each of THOSE to see what the issue date was. If the date was later than the purchase date I downloaded it. (I did not download all because some were not relevant to me). When all was said and done, I dutifully and painfully installed each one by one… Until…

One of the update installers completed its work, asked for a reboot, which I allowed and then…

The Lenovo W530 stopped booting. It just stopped going past the Boot Menu, but instead of showing the various USB stick, external disk or even WIndows2Go on USB OS plus the internal drive, it simply showed ZERO boot devices available. In the meantime, the utilities area allowed me to run disk tests on the internal drive and memory etc. All came back 100% but the machine remained unbeatable. So, after spending one day trying to resolve that, I had to go in for a technician to try everything he could, and he had no luck either. FInally, the only way the machine was booted was with LAN startup and formatting and reinstalling the OS. That used up most of today. And now I have to dig for installers of all the files, not to mention the work in progress from the last few days that had not been backed up (since I am not at home in NY).

[I also posted this product review on Amazon]