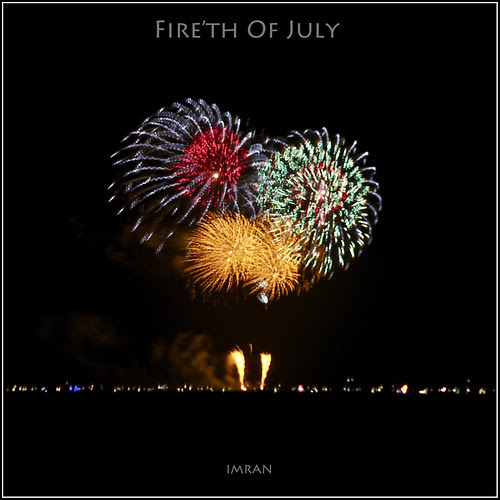 21 years of living in New York, 11 of them in Manhattan, and I have not yet made it to the Macy's Fourth Of July Fireworks.

I almost decided to go this Fourth of July, but the idea of spending 8-10 hours (from East Patchogue, via cab, LIRR train, another cab, hours before the event to catch a good spot, and then back) and wading through huge crowds for a 26 minutes show again did not appeal to me.

A quick Google search revealed that the Grucci Fireworks of Long Island were actually scheduled the same evening for Davis Park, on Fire Island, right opposite my home, just about 2 miles away across the expanse of the Great South Bay. I have been to these fireworks when my boats were still in New York and not been lost to Florida forever.

This was nothing like the Macy's Manhattan event, but I still managed to capture a few interesting shots, experimenting with different settings on the camera. This way, a future NYC trip is more likely to yield better photos.

The tripod mounted Nikon D300 captured this at ISO100, 300 mm (450 mm equivalent) zoom, with full manual 8 seconds exposure at f/10. Because of the distance and open space in the photo, this is cropped to nearly one-third its size.

What I loved about this shot was how the timing worked out with red & purple; green, white and red; and orange bursts making it by chance look like a Heart shape in the sky. (The bursts happened seconds apart and were not the way fireworks companies can make red-heart shapes from one fire burst as you can see the single strand of Red inside the Green/Purple one to the top right). Hearts, Within Hearts, On Fire.

Another thing that is on my list, which would improve the timings of shots for future events. When things get better, I will invest in a wireless trigger release in coming months, God willing.

A quick Google search reveals no instances, so apparently I just coined this phrase, "Fire'th Of July". Enjoy this and more Fire'th Of July fireworks photos I will post in coming weeks instead of boring people with all the photos dumped online together.

Since the sky was dark, the framing of black made it even more dramatic. I used unusually gray and small typefaces for the titling, to retain the signature look but not overwhlem the actual subject.