The more things change, the more they remain the same. Or say they say. I remember in the early days of the Internet how animated GIFs were so popular because they were one of the few ways of showing movement or multiple images in the era of very limited bandwidth. As the Internet's largest use became web sites (in addition to email) animated GIFs tended to fall off the horizon, no pun intended. Now, suddenly they are all the rage again, for some time. Ironically, it is still not easy to make quality animated GIFs, or to share them. FaceBook does not let you upload them, but finally is letting you see them if they are linked from somewhere else. Flickr, that was sleeping while Instagram took over the masses' photo craze market, makes it possible to upload animated GIFs, but the last time I checked they will NOT display, unless you include a separate link to one of the other size versions that Flickr offers. That is why, even though I have been doing Internet video from the time the first release of QuickTime with my then amazing top of the line Apple PowerMac 110 AV, creating postage stamp sized video movies. That has given way to my moving into creating some of the first 4K 3D videos, in addition to other things like time lapse music videos, and more in photography, like 360 and 360x360 spherical panoramas, etc. But Animated GIFs were not a priority. As I recently saw this cruise ship leaving the Port Of Tampa approaching the great ball of fire we call the Sun, as it set over the Tampa Bay horizon, I took several photos. They were taken handheld, not on a tripod, so they could not be totally accurately framed, but I managed to make this as my first official animated GIF. Now the question is to see how many people can see it on Blogger, and on other platforms. Imran
Posted by IMRAN™ at 8:30 AM No comments:

Embrace them all, as I embrace them all, my loves. For without their total embrace we would not have these mind blowing visions turn into reality in front of our eyes, filling all our senses, covering even the giant expanse of the sea with reflections like goosebumps as it experiences the blending of the two right above it, reflecting on it, making it even deeper filled with passion to unleash.

Boating, Flying, Sailing, Kayaking, Fishing. You name it, you can do it. Another stunning "winter" weekend on Tampa Bay in mid-January experienced from my blessed home at Apollo Beach, Florida.

Side By Side SBS 3D 360 degrees view of a beautiful sunset at my blessed home's private beach on the South Shore of Long Island, New York.
Posted by IMRAN™ at 8:45 PM No comments:

When the lapdog henchmen treasonous military officials under dead dog dictator General Zia had me arrested and court martial(ed) for being a student leader opposed to his CIA-backed, US-funded, fundamentalist-creating, government, I was among several people thrown in Kot Lakhpat Prison, in Lahore, Pakistan… of course after being beaten up quite well by 6 cops, sentenced ostensibly to 2 years hard labor without any defense allowed by some two-bit colonel in Summary Military Court (SMC37), shackled and thrown off a truck on reaching prison…the amazing thing was how my mind immediately started looking forward to making that a positive experience. I immediately decided I would request 3 things to be sent to me.

These would be sheets of paper and some pens so I could write a book (still not done since 1982 LOL), learn to play #music (with the ground breaking Casio VL-1) and, yes, a Rubik's Cube so I could learn to solve it. In the decades since, I wrote a lot but did not actually publish a book, I made a music CD but did not actually learn to play piano or guitar, but one thing I did not even get to try much... the Cube.

Good thing I waited so long, as you can see from this video, when even a rudimentary robot can effortlessly solve it. Auto-Melody and Accompaniment & Tune programs already exist in music, making untalented people like me sound tolerable. Now all I have to do is wait for the one that will take all my writings, organize them and publish a couple of books for me. LOL

A rich complex ‎cloud pattern can either hide the sun during cold days, or overwhelm the lusty ‎dusk, a juxtaposition of brilliant days and bold nights, blanketing the sunset in disappointments rendering it unseen. Or, if seen and appreciated at just the right angle, just the right clouds can make for stunning ‎sunset colors that most eyes will not see and many souls will not experience --- except those who submit to the masterful ‎god and open up mother ‎nature to receive what he puts forth, regardless of the time of day, people, place, or environment.

If the clouds totally dissipate, things surely become clearer, but a lot of the color opportunities for magic, the shades of gray and million shades of uninhibited passion, unbridled lust, unconditional love, and edgy untamed desire can be lost, just like in life, where extraordinary lives can be surrendered to ordinary mere existences of ordinary people. It is up to you, my incredible gorgeous unique creatures of ‎passion, who can envision the sweet, unimaginable but most definitely achievable juxtaposition of what the world allows and what must be experienced to have made life fully lived, in every sense of every sense, forever.

That takes total surrender to the master of your ‎destiny while you take control of your fate, and write it using whatever soft tip it takes to write on the touchscreen a declaration of total embrace, while gently but firmly guiding any elements of resistance, human or natural, to believe in the beauty of what all will experience in time.

Instead of letting a small, fertile, moist mound not yet fully developed turn into a mountainous obstacle, nurture and develop it into another beautiful lush fertile hill, where the showers of loving rain plant seeds for many flowers to bloom in two sweet valleys alongside each other. May we be blessed with just the right balance of light and shadows, clouds and sun, before the sun finally sets embracing the night forever, when the story ends, not filled with incredible ‎memories, but with unfulfilled ‎dreams and ‎fantasies. Don't let that happen.

The choice is yours. Surrender to dark storm clouds seeming to creep in unexpectedly over a magical scene, or hold the hand of the master and commander you submit to, by your own proud and bold choice, to help you steer around them and embrace the juxtaposition of ‎lights and ‎shadows for magical dusks forever. 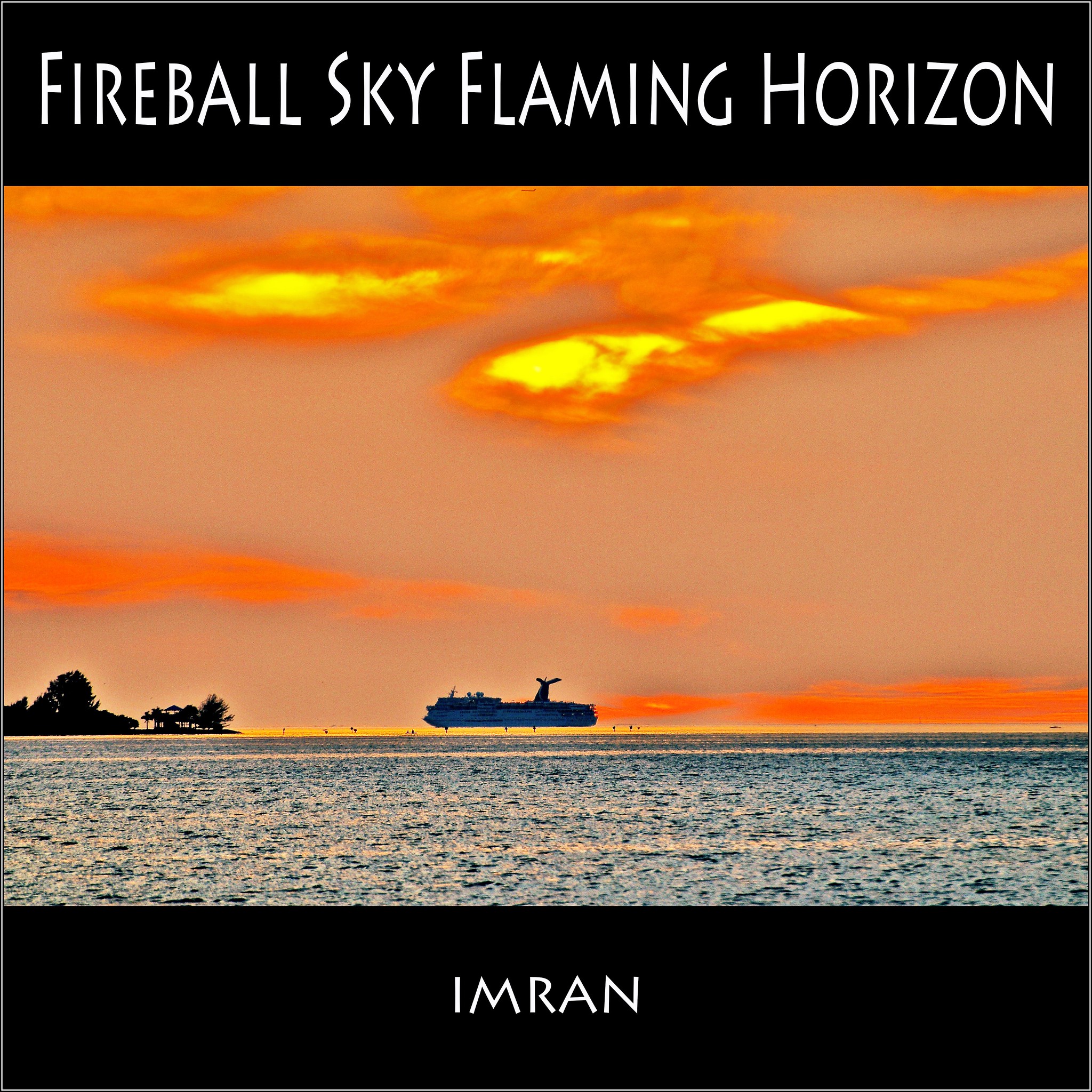 This cruise ship was literally more than 20 miles away when I captured it going past where the #sun was totally behind it and clouds. The Nikon D300 handheld photo at 300/450mm eq. zoom shows the magic even of “dull” sunsets over Tampa Bay, seen from my blessed home at Apollo Beach. The trees to the left are straight across from my home but a long drive to get to at a popular state park, at the edge of the peninsula there.


(via https://www.youtube.com/watch?v=OYv1G-w0Uis)
A cool cloud filled day over Tampa Bay Florida as the sun breaks through now and then. Relatively cold but maybe because I'm in a short sleeves shirt.
Posted by IMRAN™ at 6:08 PM No comments:

Does Science Prevent Or Prove The Existence Of God? - IMRAN™

"Afalaa Tatafakaroon". Will You Not Think? That is a line in the Holy ‪‎Quran‬.

I pray Oh God, Help Us Understand The Secrets Of Science & The Universe, So We Understand You!

I am sure other holy books have similar statements about using our minds. But for some reason, a lot that modern organized religions seem to be do is make people close their minds and blindly follow whatever some smooth talking preachers built up as 'The Truth' over the last few centuries. The truth is, we are far from understanding the ultimate truths of the ‪‎Universe‬.

I am sure you are among the many educated people who believe in ‪‎Science‬ but also believe in ‪‎God‬ the Omnipotent Creator. "Science Increasingly Makes the Case for God" is an interesting article though it does not have enough information to fully live up to its headline, but it is a useful point of reference in The Wall Street Journal.

I've always believed that not only is the truth out there, but also that is it not going to be one or other extreme of Science No God versus God No ‪‎Evolution‬ etc. Instead, it will be a combination or the two, or likely, even of things we do not even yet comprehend which do not fall under science or ‪‎religion‬.

How many times do I have smash some rubber, glass, steel, carbon fiber, and plastic together to create a perfect ‪‎Ferrari‬? I refuse to believe that any of my beloved beautiful loves and their gifts of unconditional love submitted to me, or for that matter, the perfection of Charlize Theron, are random accidents. ;-)

Nor do I blindly believe that some texts collected over the last 2000 years when people did not even understand the nature of science, are somehow the most accurate depictions of the Universe.

They are powerful books with stories to help us ideally be better human beings (if you take out the parts about killing others that almost all the books of the time command).

No, people, the earth is more than 5000 years old, just like the sun does NOT revolve around the earth. There IS evolution that takes place and genetic changes and mutations that are being recorded by science based on our current state of life and the planet. But, no, evolution is likely not the source of the perfect imperfection we call human life.

In their insistence of There Is No God, it seems that even supposedly people gets almost as rabidly fanatical as any Bible-thumping persons who believe that God created the Earth 5000 years ago or something like that, refuting evolution, while believing a man could walk on water and bring the dead back to life, and more.

Many believe in ‪‎angels‬ too. The truth is likely a combination of things is a blend of the two and maybe even more. Maybe God is the Creator of this Universe, as the grand designer of his project... maybe Angels are his engineers, and project managers,... maybe the day he shuts down the project for recycling is the day of judgement.

But, then, who does he work for? Who created HIM? And what giant box does the Universe fit inside that may be part of a larger ‪‎Multiverse‬, which may be one of many in an ‪‎Omniverse‬... and so on.

Knowing the infinite depth of our ignorance, even our inability to fathom the concepts that would entail, is another of the gifts of the Creator, to use our MINDS to even measure what we do NOT know.