Imran Anwar is founder of Internet email in Pakistan, co-founder and co-owner of the .PK ccTLD of Pakistan, and founder of the credit card industry there. As a New York based technology, cloud computing, strategy, marketing, media and business professional he is often seen and heard on global media like CNN, Fox News, Express TV, WWRL and many others. These are Imran's personal opinions and do not necessarily reflect those of any employer, parent company, client, family member or other persons or organizations. Phew!

Standing, in time, vast Ocean's Beach,
Towering over tiny grains of sand,
Some dark, wet, others pale and dry.
Gazing up, hours, at blue moonlit sky,
Sparkling stardust, ours, waiting at hand.
Orion's Belt, my spirit pants to reach.
One day, I'll be among those stars,
Smiling at beautiful life from afar!

The Cloud Security Alliance, just announced a new stack to address issues of governance, risk management and compliance for the nascent but exploding cloud computing industry. InformationWeek has a good short news report on the subject.

I consider this welcome news, from two perspectives - as an individual professional opinion; and as the opinion of someone leading vertical solutions and service provider offers planning & management, at an industry-leader cloud technology company.

Cloud Computing has been fortunate that its hype only slightly exceeded the real world benefits it provides, and its ad-hoc, vendors and clients deciding what's best for them, implementation of governance, risk and compliance management were "just good enough" to keep the ball rolling. For early adopters, and for those seeking immediate TCO (Total Cost of Ownership) and ROI (Return On Investment) value of next generation data center models, with highly converged virtualized infrastructure, this was not a show stopper.

But, for the Cloud industry to evolve to the next stage, where it literally can explode to the stage, which would make the latest set of analyst predictions, such as those quoted in the article above, actually likely to come true, governance, risk and compliance issues had to be addressed sooner rather than later.

The challenge in every new paradigm (or even what some consider a repackaged old paradigm enabled by technology capabilities that enable the concept to take off this time) is to balance between extremes along those three lines of concerns.

I have called attention to these topics in the past in print and online. My concern has been that overly excited buyers, and sell-at-all-costs vendors could lead to risky behavior on one side of the spectrum, while analysis paralysis would keep a huge majority from losing out on the benefits of cloud computing.

What is needed, as I have said before, is a pragmatic and practical approach; rather than utopian and impossible drives for perfection, that cannot be achieved in one, much less, three areas of importance like GRC. Add to that the complexity and impossibility of agreement, a situation in which every stakeholder brings their own colored and colorful viewpoint.

The need is for comprehensive, but not onerous, approaches to governance; risk management without seeking absolute, "perfect", impossible to achieve, levels of "zero risk"; and compliance standards that enable enterprise and service provider moves to cloud models, rather than being roadblocks. These are are all essential steps without tripping up clients or vendors.

The CSA's latest contribution to successfully achieving these is a free GRC stack, a set of toolkits, for enterprise customers, vendors of cloud & security solutions, as well as those tasked with auditing IT. The toolkits are, Cloud Audit, Cloud Controls Matrix and the Consensus Assessments Initiative Questionnaire (Apparently they did not spend much time on coming up with a better name for this last one!). You can download the GRC stack free.

This is not, by any stretch of the imagination, GRC nirvana. There will be many significant areas, from Department of Defense related federal requirements, to the extremely granular levels of security an increasingly networked global financial system requires, and many others.

But, I hope, and remain confident, that this will be the first in an ongoing series of steps towards ever-improving quality of governance, risk management and compliance standards, which will help cloud vendors and users alike.

Imran Anwar is founder of Internet email in Pakistan, co-founder and co-owner of the .PK ccTLD of Pakistan, and founder of the credit card industry there. As a New York based technology, media and business professional he is often seen and heard on global media like CNN, Fox News, Express TV, WWRL and many others. These are Imran's personal opinions and do not necessarily reflect those of any employer, employer's parent companies, clients, family members or other persons or organizations. Phew! 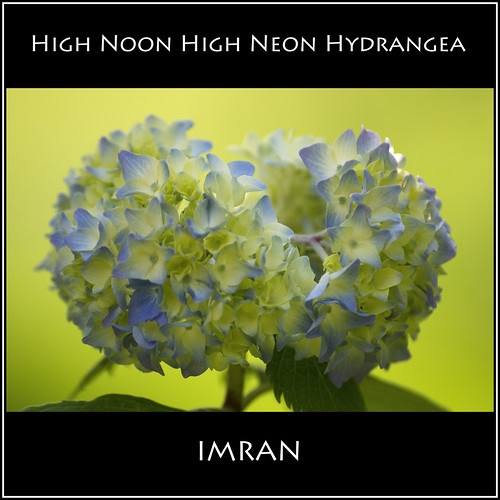 This is one of the most unnatural looking yet completely natural colors I can recall capturing. This non-HDR shot shows stunningly high dynamic range of my neighbor's highly Neon bright Hydrangea to the side of my house at high noon.

It was nearing mid-day when I stepped out of the house to take some pictures on an especially vivid, blindingly bright, Summer day in June.

Usually the weather at my home at that time can be somewhat hazy from humidity and heat on Long Island, New York.

This day it was definitely glowing warm and the sun was almost vertically above. These plants are at the corner of my neighbor's house, and partly shaded - but the grassy grounds that stretch behind the house were awash in the bright hot light of the sun.

I cannot take credit for the spectacular colors the Nikon D300 captured at ISO280. I was simply shooting in Program mode - while bending over backwards (literally) to frame the three depths of flowers aligned but visible for a bokeh effect and playing with the 100-300 (450mm eq) lens.

I hope you too can feel the heat and afterglow from this image. 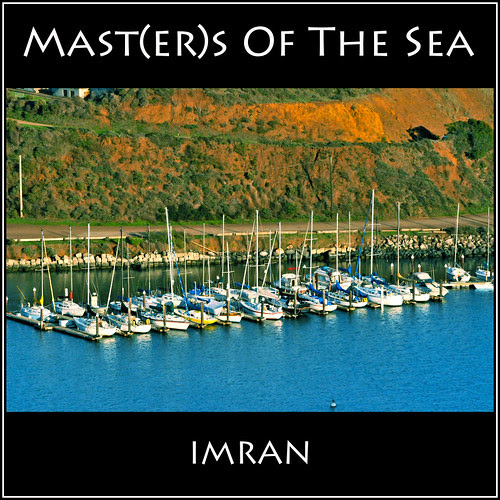 As a late Fall sun started to set on the golden hills along the Golden Gate Bridge, still relatively late compared to New York's earlier forays into winter darkness, at 7:45 PM, I braved the breeze and decided to walk across the length of the bridge.

Along the way, I managed to shoot some pretty spectacular sunsets you have seen here earlier, made special by my managing to catch scenes without the ongoing rush of traffic spoiling the shot.

With the Pacific Ocean beckoning the sun into it's calming lap to the right of me, I looked down to my left and saw the idyllic scene of sailboats, masters of the sea, sitting in silence, as cosmic winds of photons swept by them to crash glowingly into the amber green earth behind them. A golden moment to remember, from whereever I see, to shining sea.