Imran Anwar on Imran Khan: Why The Future Of Awakened Pakistan Is Not In One Man's Hands

The news media are buzzing about a rather large political protest gathering that took place in Pakistan. People seem galvanized and gravitating more to a national hero Cricket player, turned populist politician. Much that I am happy to see the silent majority Pakistani public starting to rise, I do not have much hope for the person they are following, even though I like and respect him. Here's why.

Imran Khan was about a decade ahead of me at Aitchison College, Lahore, Pakistan, and about 100 years ahead of me in popularity (and dashing good looks :-) ). He will always have my respect for sacrificing his popularity not for wealth but for a Cancer Hospital (in the memory of his late mother). With that one mission in life, he has done more good than Zardari, Benazir Bhutto, Nawaz Sharif and Pervez Musharaff combined could do - even if they had tried.

However, there were two reasons Imran Khan struggled in his quest for national power.

Initially it was the typical curse of Third World countries like Pakistan... the same "awam" (عوام - public/populace) that curses crooked politicians is also the one that votes them in to power. Why? Because the crooks are the ones who will help peddle influence illegally, to get things done when voters ask for favors. Someone supposedly aboveboard will not. So, he, like Imran Khan, will stay on the fringe and not get real power. This one sad realization was one major reason I said good bye to my political aspirations in Pakistan when I left 20 years ago. (I do salute Imran Khan for staying and putting up a good fight, even at great personal risk).

Now that the Arab Spring in the Middle East, the Occupy Wall Street in the United States, and far more importantly, the middle class uprising in India against corruption has vested interests and tyrants (political and economic) running for cover, Imran Khan may have a real chance.

But, that brings us to the second serious problem. He is still hampered by lack of any clear (articulated) PLAN that he would execute on, if he was in power. Even his speech in his largest rally (which is being reported on by media including the New York Times, etc.) was another "letdown".

Image via Wikipedia
The only Pakistani leader who could get away with rambling speeches, and still have a million people or more listening and jumping into action, was the late, once-great, later-tyrannical, deposed and hanged Prime Minister, Zulfiqar Ali Bhutto. Imran Khan is nowhere near that man's stature, statesmanlike quality, popularity, or even vision. In the end, even with his charisma (that Bill Clinton would want to learn from), speaking ability (that Barack Obama would dream of achieving without a teleprompter), it was Zulfiqar Ali Bhutto's hubris, putting the interests of his crooked henchmen ahead of the nation's, and having no more vision and plan beyond getting re-elected, that got him hanged by General Zia-ul-Haq and the military. 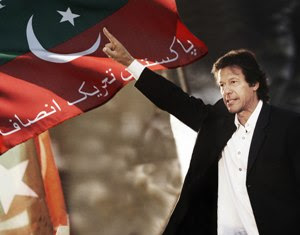 Image via Wikipedia
Imran Khan needs to do more than gather 100,000 people (and make a meaningless speech).

Even I can make a speech about what the problems in Pakistan are, name who the crooks are, and why we need to solve the problems....

But, without saying HOW I would solve the problems, WHO I would have as my trusted and nationally trusted lieutenants to execute the plan, I too would be as useless in power as Imran Khan will be - if he does by some twist of fate find himself in government.

Unfortunately, even 15 years in politics getting to this point, Imran Khan, whom I would love to see in power compared to the current crop of so-called leaders, has neither stated his vision, nor articulated his strategy, and neither has he shared a roadmap and execution plan. That is what makes Pakistan's leadership void doubly sad.

Even worse, regardless of his Western education and former lifestyle, Khan's current wave of popularity is driven by a populist state-the-obvious (politicians are crooks and have done nothing for Pakistan), blame-USA fervor (while sometimes sounding like a Taliban apologist).

Yes, the current leaders and even the opposition are crooks. News Flash: So are the ones in the USA and other countries. (Italy's Premier could give Pakistan's Asif Ali Zardari a run for the money and the scandalous behavior).  Yes, the USA has a shameful record in Pakistan. Yes, Pakistan's spineless sellout leaders have allowed even more exploitation for their own power. But, Pakistan had economic problems since independence. It has had ethnic near-civil war in different regions for decades before 9/11 or America's arrival in Afghanistan.

Without addressing specific problems that Pakistanis themselves tolerate -- and allow their leaders to create -- neither the cronyism-loving leaders, populist personalities, nor well-intentioned analysts, or worse, power-hungry dictatorial generals, can change the country's future.

As I have said in my own public speaking and on radio & television.... "National destinies are created by people, not by leaders, dictators, pedagogues, or sycophants. Pakistan needs to be saved not from America, but from (illiterate, violent, extremist, close-minded, crooked, corrupt) Pakistanis, by Pakistanis (who still believe in the great future that the nation is capable of achieving)."

Imran, will agree with most of what you wrote however Imran Khan still seems like a lot less of the evil currently ruling the country. To be out of the clutches of ancestral and corrupt politics this may be the path to awaken a lot of us who are still sleeping. :)

I cannot comment on Pakistan, but I do agree that the people are responsible for the government they have. In America we can blame the corporate media, but what is stopping us from thinking & turning it off? Still..it is terribly hard to fight against money & to keep our polititians from being bought & paid for..

ok......you mentioned you had an interest in politics and than gave up due to corruption in pakistan....in your opinion Imran has no PLAN or VISION, as a former politician what would be your VISION and PLAN if you were in his shoes?

Imran Sahab - I followed your comment from NY Times. Getting back to the issue at hand, I feel that while Bhutto was a great leader, there is a probability you are looking at him through a nostalgic lens. In my humble view, had Bhutto not been martyred by Zia, his political legacy won't have lasted as long as it has. As for Imran Khan not having strategy, I think the objective of any leader is not to devise detailed specifics, rather state requirements and pull together the team who believe in the vision and can hash out a detailed plan. Just so that you are aware, PTI has already given its energy policy and devolution policy. A comprehensive economic policy is due on 24th of August Industrial development policy, law and order policy, and education policy is in the pipeline. I can't go into detailed specifics, but based on the structural constraints we face, IK is the best political option out there. Rest as you have rightly pointed out, it is us Pakistanis who have to work for actualizing the change. Trust me Imran Sahab, as long as we have the will, God willing we will also be able to find the way!

Agreed to what Falcon said! Leaders give vision to lead country or society, they have charisma to attract people, they have honesty to hold position of power, they are more loyal to their cause and country then any body else, they give hope to oppressed class, They are true and have courage to say what ever they believe is right.

I believe that Imran Khan has all those qualities and will surely serve the nation in the best possible way.

Leaders do not make detailed policies but the make the best team.