Not Much Room Ahead Of Mushroom Head! 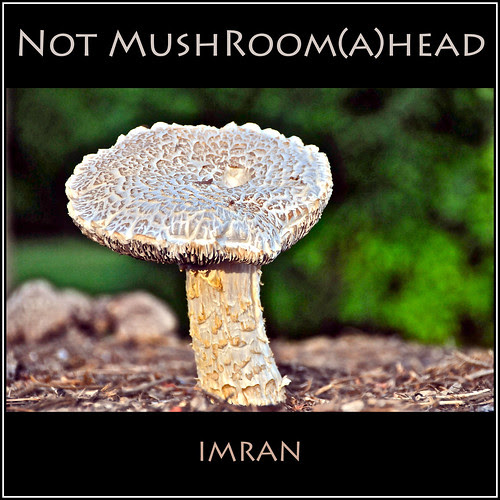 From Down In The Dirt In Patchogue, Long Island, Not Much Room Ahead Of Mushroom Head! - IMRAN™, originally uploaded by ImranAnwar.

Talk about opposites. From the heights of the Eiffel Tower, looking down on Paris, at the end of Fall, in the previous photo, to lying in the East Patchogue Long Island dirt, at the end of Spring, in my roadway's flowerbeds, looking up at a mushroom.

From enjoying tiny mushrooms with a filet mignon dinner at the Eiffel on 12/6, to the eye falling on this beefy looking giant burger sized mushroom in Patchogue on 5/7. From being smartly dressed for sophisticated dining, savoring escargot in one of the most romantic spots, to being thankful I was wearing cargo pants for this shot, crawling ahead at snail's pace on the ground.

I was going for a walk, when I noticed this spectacularly large mushroom growing among the beds - where I have photographed a stunning iris previously posted. I immediately went back inside, grabbed the camera and came back.

Prostrating myself at the altar of alternate photography, but being careful not to sprawl too far into the sprawling community's entrance roadway (it's a private street but anyone taking the turn could publicly turn me into mushroom barley soup), I zoomed in, to parlay the mesmerizing lighting.

It was exactly 6 PM, so the late afternoon sun, coming from over my left shoulder, was casting yellow-red tones, making the mushroom almost glow with nuclear sharp edges. At the same time, the bush to the right and the grassy knoll to the left behind it were showing shadows of the trees above me, making that area look much darker than the mushroom.

Without letting the Mushroom Cloud my judgement, I quickly clicked 3 more shots, rising up, but not getting high, to say Hi to a passing neighbor.

The Nikon clicked at 1/500th second, the lens at 105 mm near full aperture, with ISO at 800 helped create some interesting bokeh with only a narrow band of mulch in very sharp focus at the feet of the head mushroom.

I have another photo I will post another time for which I have a clever title that did not apply here. So, I was scratching my head trying to be clever.

Mushroom Proud could apply but was not close enough to the usual Mushroom Cloud people know in common usage. (I'm waiting for a day I can find a mushroom on a hillside with clouds above it to photograph. LOL).

Since I'd gotten as close to the mushroom head to take this picture as I could, there was not much room ahead, and I remembered the name of the alternate music group Mushroomhead.

I am not sure just what kind of mushroom they're into, but Not Much Room Ahead Of Mushroomhead seemed appropriate.

Another lesson learnt. Never postpone a photo opp. Grab that camera when you see a chance to catch something unusual. Next evening, not only was it not as interesting lighting, I noticed that rabbits or something else chewed half the top off this mushroom!

We'll always have Paris, but we didn't have that mushroom forever. :)