I Atop Paris' Eiffel, Eye Fell On Paris Below 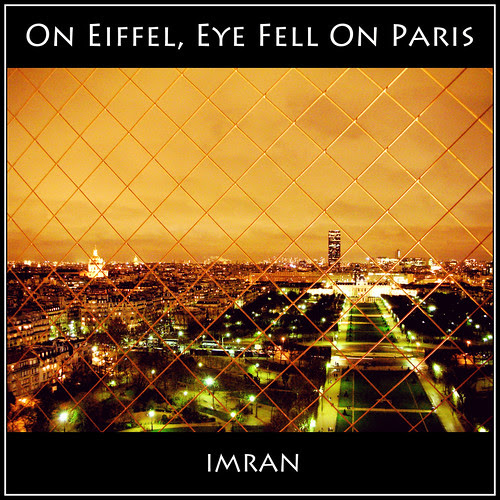 PG13
I Atop Paris' Eiffel, Eye Fell On Paris Below, Under Towering Storm's Rise In Stunning Sky

To be atop the Eiffel Tower in Paris for a romantic dinner at Christmas time is all you can imagine and more. I would have much preferred the amazing experience to be in stunningly clear rather than stormy weather.

Still, a line to get into the Eiffel Tower, and it's restaurants, snaked below it. Having made reservations through a reputable (though expensive) service meant we did not have to stand in line in the rain and were whisked to the elevators.

French cuisine, and the food in Paris in particular, are just magnificent experiences, subtle splendors of culinary delights. But the Eiffel Tower's two restaurants, which can be called fairly expensive and terribly expensive respectively, are nothing to write home about (or in modern times, to email or blog about). They are tourist traps and definitely not the finest that Paris offers. It's really about location-location-location! And, making the cash register, ring-ring-ring!

Though the restaurant had been filled to capacity, and there were people lounging about the top after dinner, the rain and stormy weather made it possible to take some unusual photos of the city of lights.

Having only the pocket Nikon S6, I could not do much except snap whatever I could in the terrible weather. Handheld shots were coming out boring or shaken/blurry most of that night. Even iPhoto enhancements recently did not do much to make up for the difficult photography day that was.

But the golden stormy sky through the metal mesh was captured by putting the camera down on metal supports and railings with the longest exposure I could get using the timer. The limited focus and non-existent metering options ensured the perfect overexposed sky of Gold through no talent of mine. Photoshop brightened and framed it today. Sadly I was also running out of battery - after a 12 hours day of sightseeing. So there are not too many photos of this dramatic trip...

A time of museum visits and stylish dinners, hectic days and sensual nights, dangerous liaisons and consummated fantasies, forced by forces of nature to take willing submissions, careless whispers and sweet surrenders, openly opening portals and secretly secreting dreams in spiral staircases making them stairways to heaven, living large with little deaths, explosive invasions and gentle withdrawals, passionate mergers and eventual tempestuous partings... marking the spots and leaving a mark, on the city, on the spot, on the soul.

Oui. Just another Evening In Paris. All and more than what this city of lovers has witnessed in its history-filled history, of loves and lovers, power lusts and lust's power, from the heights of it's story-filled storied multi-story tower to the singular depths of its passionate lover's soul.