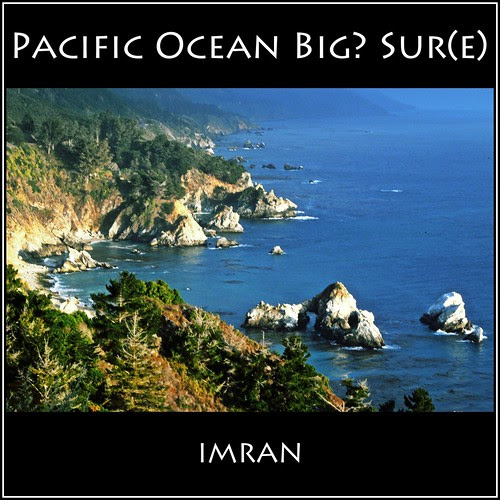 Is Pacific Ocean Big? Sur(e)! - IMRAN™, a photo by ImranAnwar on Flickr.

About 18 years ago, my friends based in California, and I, had taken a brief trip along the famed Pacific Coast Highway (Route 1), from San Francisco / San Jose to the towns of Carmel and Monterey.

It was a beautiful scenic drive, and a great time with friends, who, like passing time, can move into the memory drawers of life.

This year, after a hectic business trip to Santa Clara and San Jose, I changed my return flight, from San Francisco - Long Island, to a departure from Orange County, near Los Angeles.

My goal was to take a 2 day slow drive along Route 1, and get to visit a dear cousin, who had visited me with her then-brand new husband (LOL) about 12 years ago in NY, and whom I had long promised to visit.

My trip was delayed because unexpected meetings meant I could not depart from Santa Clara til about 3 PM.

That is when I actually started calling around for hotels to have another interesting twist. It was coming up on the last weekend for many families before schools started. So, there were no hotel rooms available anywhere, except for $500 or more per night.

But, I plugged away, sitting in the parking lot doing searches on my iPhone and calling around but in specific areas on the ocean route.

I was also sorely disappointed that the day of this trip was completely overcast weather in California.

I decided to head towards Irvine and Newport Beach (where my cousin and her husband and three daughters I had never met lived). My plan was to stay the night in a scenic place, which I ended up picking Cambria to be. (A lovely place, where I also got a reasonably priced, well under $200 or so compared to $500, for an only remaining room, on the ocean, with breakfast included, so it was quite a bargain at that time).

But, as I made my way down Route 1, I realized that my photography plans were pretty much foiled, both by the weather, the lateness of my departure, and a misbehaving camera.

One primary place to visit on my list had been the Big Sur area, and its rocky structures along the cliffs and hills along the Pacific Coast.

Interestingly, as I got to that area, the sun had started falling, but the clouds were lifting enough for the sun to cast a hot yellow red tinge on the rocks of Big Sur. At the same time, a contrasting fog was rolling in from the ocean just a mile or two further away.

The scene was surreal… the green trees and sandy, muddy, rocky mountainside was appearing saturated in yellow, the rocks jutting out from a darkening blue were almost overexposed looking white, while the hills just a few miles away merged into a hazy blue layer of hazier bluer mists, with the waves rolling onto the sliver of sandy beach were a beautiful combined shade of turquoise and teal.

All in all, it ended up being a unique, once in a lifetime, set of weather conditions, of a small slice of our planet worth seeing in many different lights.

Is the Pacific Ocean Big? Sure. But, at Big Sur it is just a tiny microcosm of what makes our beautiful blue planet the home not just of our living beings, but our souls that feed on the beauty of nature.

I hope you enjoyed this travel experience I am sharing. Thank you.