How Many Statutes Does It Take To Change A LightBulb In NYC? 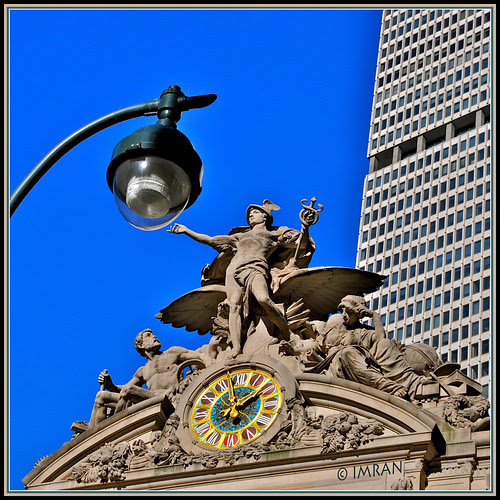 How Many Statutes Does It Take To Change A LightBulb In NYC? - IMRAN™, originally uploaded by ImranAnwar.

The Grand Central Terminal's beautiful statute seems to be reaching out across the width of 42nd Street New York City to touch and change the light bulb. Like New York work crews, one seems to be there to work, two to stand/sit and watch like, ummm, statutes. :-)

An interesting fact of history will intrigue you. The Grand Central Terminal was a target of foreign terrorists on September 11... in 1976! Croatians placed explosives that could not be defused, killing an officer and wounding many people. This was a full 25 YEARS before 9/11 2001 happened.

Several other things to note about this photo. That really is how blue the sky was captured by the Nikon D300. See the sky reflected color in The MetLife building, that I still think of as the old PanAm building behind.

And you can see the freezing day's burning sun reflected in the globe of the light fixture. It is amazing how closely the blue sky matches the blue in the clock, which I happened to catch at nearly 2 PM.