I am a big proponent of peace in the Middle East. I have also always questioned the Pakistan policy of being anti-Israel when so-called enemies of Israel and thaikedaars of Islam, the Arabs, quietly go about doing business with Israel. I am always amazed by the Pakistani public, which cannot stop making speeches about Jihad against India to liberate Kashmir, completely ignore the traditional Palestinian support of India. Plenty of people used to have posters of Yasser Arafat on their walls, though he considered India's late assassinated Prime Minister Indira Gandhi his "sister".

When all is said and done, Pakistan and Israel have more in common than not. They both won freedom from the British Empire. They were both created in the 1947-48 timeframe, as nations carved out of the land of another nation's land for a religious minority. They are surrounded by much bigger enemies from the other religion. Though they are both created for the people of a particular religion, they both haze sizable minorities.

They also have both been traditionally moderate liberal societies where their respective fundamentalists have assassinated leaders considered too modern or moderate. Both are also US allies, but of course the Jewish influence of US politics is a subject books can be written about while in Pakistan's case any such influence could be listed on the back of a folder paper napkin.

Both nations' cultures and societies have tended to be entrepreneurial and generally kids are encouraged to study (though Pakistan's vast illiteracy rates versus Israel's high literacy rate are a sad comparison). Engineers and Doctors are among the most popular professions, not to mention Lawyers.

Both also share the shameful treatment of their religious minorities. In the case of a Pakistan, though, it is a small evil minority of terrorists willing to kill themselves to blow up fellow Muslims in mosques. In the case of Israel it is a far greater state sponsored display of terrorism when kids throwing rocks in OCCUPIED PALESTINE are shot dead, when in their zeal to kill a Palestinian leader the Israeli Air Force drops 1000 lb. bombs into a residential neighborhood, killing innocent civilians and not the actual target.

What gives Israel this seeming Green Light to commit mini-genocides, theft of occupied land, state to state terrorism and official piracy on the high seas, is the shameful weakness of the USA. In America it is considered political suicide to question policy (a political topic) on Israel (a country) because the often-Jewish-owned or controlled media organizations here (easy to check the ownership of the top newspaper and magazine chains here) and the Zionist lobby will brand that person an anti-Semite!

From Marlon Brando to Oliver Stone, as I wrote even in 1996, even the gods of Hollywood have bowed to the Israeli lobby. None is more insidious, or more an intellectual-terrorist, than AIPAC, in its meticulous targeting of anyone who dares raise a voice against Israel.

So, while I am praying for peace in the Middle East between Palestine (Occupied) and Israel (and also between Pakistan and India on a liberated Kashmir), until AIPAC stops its shameless and insidious control of dissent and debate on Israeli policy of the USA, I have to consider organizations like it and other Zionist fascist genocidal groups in Israel as enemies of peace, Palestinians, Pakistanis and people everywhere, just as AlQaeda is.

AlQaeda tries to destroy America and the world openly. Organizations like AIPAC will gladly burn America and the world on the altar of their domination and control agenda. (Please note, considering AIPAC and the Zionist lobby to be evil is NOT anti-Semitism - which is the typical attack-response we expect and get when anyone questions these insidious entities.)

So, while I would love to see Pakistan and Israel also normalize relations, and leverage the hardworking and smart people they both are blessed with, I find it abhorrent that a newspaper like the Daily Times (which I believe is owned by a PPP Governor in Pakistan) does not seem to care that it's web site shamelessly displays blatant Zionist Lobby advertising.

Yes, I know, it's an online ad from Google. But, site owners have control on what they want advertised or not. Even my personal site http://imran.com has Google ads where I recall setting it not to display alcohol, etc. ads. I do not have a huge staff to even monitor this as the Daily Times owners do.

What a shame that for a few pennies this supposedly Pakistani Muslim newspaper and its owners (in dangerously high positions of power in Pakistan) are showing their complete lack of character. What the Daily Times does is like some paper called The Jewish Daily Times running an ad for a German pro-Nazi group. Jews don't all hate all Germans, but I am sure they don't go running Nazi Party ads for a few cents or paisas, as the Daily Times is doing.

But, then, what would you expect from a newspaper owner family that shamelessly steals intellectual property from newspapers and content creators - despite being repeatedly asked to stop.

Here is a screen capture of the friend of Sehyooni AIPAC Daily Times Lahore Pakistan on, ironically, Friday. 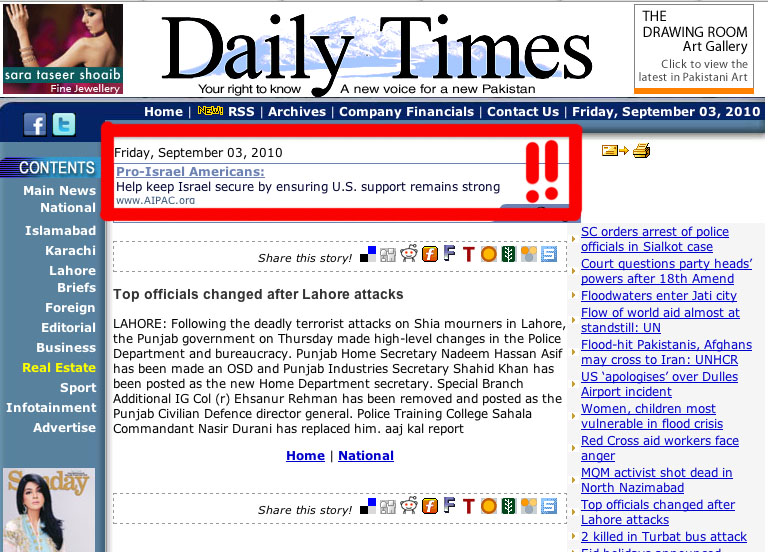