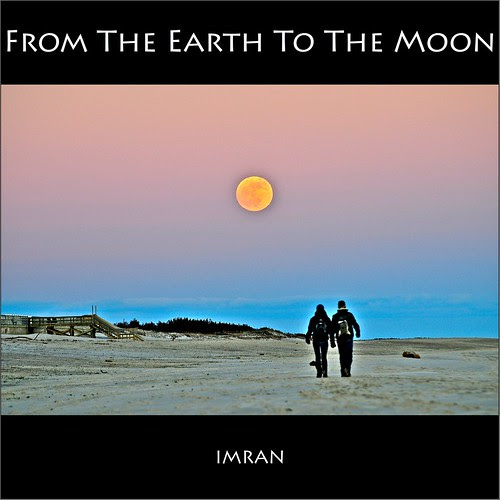 From The Earth To The Moon. Commemorating Moon Landing July 20, 1969 - IMRAN™, a photo by ImranAnwar on Flickr.

From The Earth To The Moon. It was today's date, but July 20th, 1969. I was a 7-year old kid who had left home to live with my grandmother in Karachi, Pakistan, because there were no decent schools in the remote part of the country my late beloved father was posted to, in the Irrigation Department in Punjab.

It was a Telefunken Black and White TV that we were watching in the early hours of the morning, way past bed time for most adults, much less kids. But, I recall watching, and hearing, every wonderful minute of that historic event.

Decades later, I was walking on the Smith Point Beach on Fire Island, off of Long Island, New York, when this stunning (super) moon was appearing on the horizon of a magical dusk.

I captured this moment, of two unknown humans, on a beach on earth, with their backpacks emulating personal space ready jetpacks of the not too distant future, seemingly ready to step on to the dusty, sandy, rock strewn but dry surface of the heavenly body forever enslaved to our planet.

From The Earth To The Moon, "One Small Step For A Man, One Giant Step For Mankind…".

Farewell and RIP Neil Armstrong and other heroes of the race to the moon. Hello, Moon… Until we meet again…..