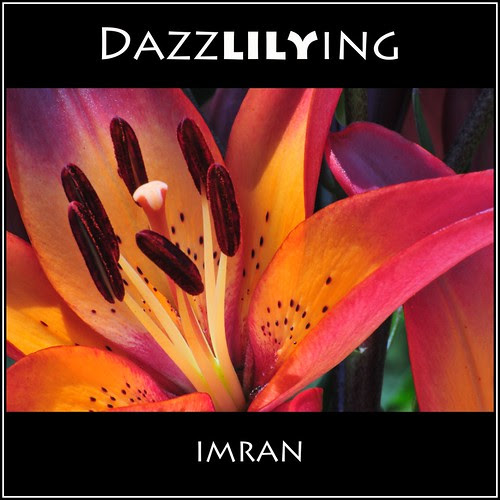 DazzLILYing! Dazzling Lily - IMRAN™, a photo by ImranAnwar on Flickr
Even as cold winter tightens its grip, freezing the ground, and chilling the bone, this unedited summer photo I took outside my home says: The coldest frigid nights will pass, as swollen bulbs with silent moans of hope and promise fill up with lust for life, lovingly grab roots, and holding on, tight, deeply clenching what they contain, until, surrounded by just the right warm tender moist mounds of fertile earth, they will release in explosive energy, luscious life, gushing bursts of climactic color... one day, one night, soon, again. And again....
SOOC Image Straight Out Of Camera!! NO editing, tweaking, of ANY kind. I did not even remove the tiny speck that was on my camera sensor until I had it cleaned by Nikon. Only framed in Photoshop.
Even though I am partial to Stargazer Lilies, especially when I plant them at my home in NY, my next door neighbor often picks out spectacular colored varities to plant.
This Lily's spectacular colors, best seen as a Wallpaper on a 27" screen, had breathtaking colors of nature, that just took my breath away. The depth and richness of tones, the shine, the texture, made this a Dazzling Lily just Dazzlilying to photograph. I hope you enjoy it as much as I do.
© 2011 IMRAN
DSC_7792
Posted by IMRAN™ at 9:00 PM