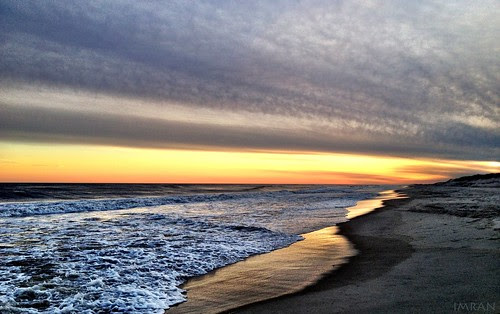 There is nothing quite like the majestic serenity of a winter’s day at a secluded spot on the ocean, with not a soul in sight for miles.

The sounds of a silent soul soaking in the scene, felt, though not heard, louder than the crashing of the waves giving up the fight against gravity and the combined strength of otherwise insignificant grains of sand making their stand.

The cold onslaught of the mighty ocean merely hoping to erase recent footsteps of a man’s walk on the beach.

The surf, rolling, thundering in, and then haplessly collapsing foaming, seething, bubbling, hissing before receding, to gather strength for its next return, knowing it has no choice, but to dance this eternal dance, until the end of time.

The Atlantic Ocean’s wave’s wave a cold farewell to a New York winter’s day and ominous clouds, with the promise that they will tango again.